Mobius.Lab Revolutionizes with Formats and Contents for the 21st Century Audiences

But what is Mobius.Lab exactly? It is an innovative production unit, through which clients may hire the creation of customized content on several topics. The content is created based on Getty’s extensive library of photographs and clips, with the experience of the Cisneros team in developing scripts, graphic design and post-production. The most relevant content produced in 2016 includes the child series “Super Genios” aired by UniMas, and the English-language information series “The Rise of Terrorism”, developed for Sinclair Broadcast Group.

“Since Getty Images Latin America is one of the most powerful platforms in the world, we have at our disposal a wide library of contents of any gender, including celebrities, politics, pets, video games, etc. The platform has over 40,000 HD and 4K videos and over 80 million photographs by distinguished photographers,” explained Marcello Coltro, Executive VP for Content Distribution at Cisneros Media.

It is interesting to see how Mobius.Lab has radically changed the business model. Currently, shows may be produced very quickly, depending on each client’s need. For example, if a client is interested in doing a special show on politics, it may use thousands of clips regarding the topic, and commission its production to Cisneros.

After the images have been selected, different production teams at Cisneros in Caracas and Miami generate the end product, dealing with scripts, pre and post-production, and graphics, at very attractive cost for the client.

Another added value of the unit is the accompaniment of each client. The process begins with a brief of what is intended, and then a free demo is delivered to the client. 90% of the times, the demo turns into a sale. It has been so successful that the teams of Venevision, Cisneros Studios and Venevision Plus are now joined by a team that is exclusively dedicated to Mobius.Lab in Caracas.

“We have agreements with Peace Point in Canada, with Medialand in Brazil and with Navarro in Argentina. So what is really interesting is that we are expanding our production footprint by giving access to independent productions of Getty Images’ spectacular library”, added Marcello Coltro.

The objective of the company is to continue our expansion in the US, Europe and Latin America, where the Mobius News project, with the latest regional news, is being offered. 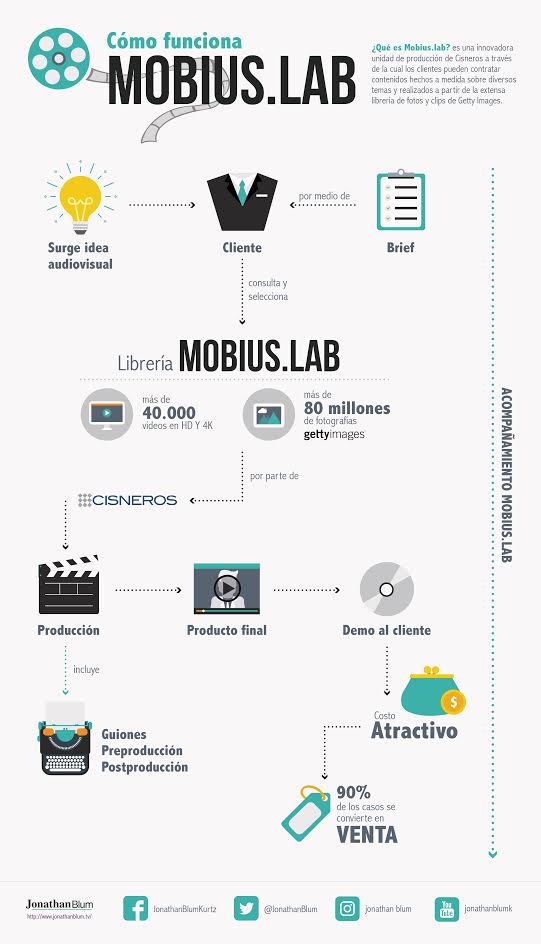